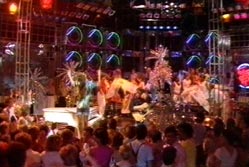 a scene from almost any 80s edition of totp in the summer. the palm trees and pineapples used to get dusted off in the bbc props department and plonked onstage for mulleted dancers in hawaiian shirts to dance around. in preparation for their holiday in benidorm.

summer anthems used to sound sunny, they weren’t about rain. of course rihanna isn’t old enough to remember the 80s. and many people won’t remember when we had actual seasons instead of increasingly bizarre and extreme weather.  when we were flying back from majorca in 1983 it snowed, in may, on the back of two weeks of sun. now, that wouldn’t be quite so surreal.

so here is my 80s summer countdown, one for each year. i’m winging it a bit on the early to mid 80s as i don’t remember much, and songs have different meanings to different people anyway.  i didn’t want to venture into agadoo territory…but while we’re on the subject, i miss those holidays where you could rely on a playlist of black lace, the tweets, bucks fizz and shaddap your face. novelty records should have stayed in the 80s though some british people still love them. last week at work, the finance team (admittedly only two people) were playing the chicken song by spitting image full blast.

i remember a particular year at butlins – thats an 80s holiday destination, kids – dancing to true blue by madonna, when the going gets tough by billy ocean and we don’t have to take our clothes off by jermaine stewart. to this day, me and my mum smirk when we hear these songs.

these are the sounds played in the garden that little girls made dances up to. on ghettoblasters powered by up to 8 huge batteries. that soon ran out so they sounded too slooooow.