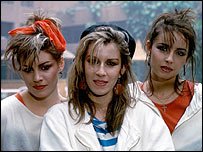 there weren’t as many girl bands back in the 80s. boys shifted units and were infintely more marketable.

bananarama – i heard a rumour

infamous for their total lack of singing ability but this added to their girl next door appeal. as a trio they managed to hold a note though, even when the lineup alternated, destiny’s child style. no one remembers the dark haired one they brought in to replace siobhan when she left to form shakespear’s sister. well, her name was jacqui and she looked like a prison warden.

possibly the most hair of all the girl groups. prince wrote their first hit, ‘manic monday’ and it was all good from there, for a god few years. have joined the long list of acts who have had one of their songs butchered by rough as old boots scouse band atomic kitten.

expose were huge in the US, not so much in the UK. predated en vogue and once they arrived, we really didn’t need expose anymore.

one of few all-girl 80s soul groups, and all the better for it. doubtlessly inspired many a 90s r&b girl band.

dutch group who had an interesting euro twang to their vocals and sound. huge smils, braids and pvc catsuits were the order of the day. this track is enjoyably bouncy machine pop but most of their output was smoother.

mary jane girls – in my house

sassy girls who must hopefully be reaping some royalties from the endless sampling of their biggest hit ‘all night long’. this track, sounds like it belongs in ‘fast times at ridgemont high’.

chirpy cockney sisters who inspired a nation of girls to raid their local branch of chelsea girl for bowler hats and cropped jackets. mel sadly died only a few years after they found success. whilst the track refers to ‘fun, love and money’ the title actualy stands for ‘fuckin’ lovely mate’.

started their careers singing backup for wham and came into their own after the split. owned the puffball skirt look in 1987.

responsible for enduring party classics ‘i’m so excited’ and ‘jump’. actually formed in the 60s and didn’t achieve commerical success for 15 years by which time the girls were in their mid-late 30s.

first ladies of hiphop and there was actually a third member, spinderella, who was gradually coaxed out from behind her decks. now the subjects of a reality show, these girls astound me as they do not appear to have aged in 20 years.

another girl band with big hair and small clothes.

prince’s band, whose one and only album is quite literally the sound of four teenage girls on a sleepover.